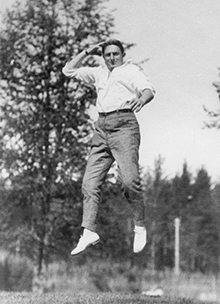 Born Denis Abelevich Kaufman, but best known by his pseudonym, Russian filmmaker and film theorist Dziga Vertov (1896–1954) holds a major place in the history of cinema. His films, which were intended as bold aesthetic experiments in documenting contemporary life, have influenced generations of avant-garde and documentary filmmakers and are as revelatory today as when they first premiered. Vertov rejected traditional dramatic styles of filmmaking, embracing new forms of production instead. At the core of his cinema is an impulse to link aesthetic form to revolutionary transformation, which we see in his newsreels and features alike.

This is the largest series of Vertov’s films ever mounted by the Pacific Film Archive. The retrospective stretches over three months, aligning with a course on Dziga Vertov taught by UC Berkeley professor Anne Nesbet, who will introduce several public screenings. We are also pleased to welcome Adelheid Heftberger, curator of the Vertov Collection at the Austrian Film Museum, who will offer two guest introductions, and University of Chicago professor Yuri Tsivian, who will be our guest lecturer on November 6.

Wednesday, September 21, 2011
7:30 p.m. A Sixth Part of the World (A Kino-Eye Race around the USSR. Export and Import by the State Trading Organization of the U.S.S.R.)
Dziga Vertov (U.S.S.R., 1926). Judith Rosenberg on piano. Vertov turned a commissioned film into “the next stage of cinema,” a Walt Whitmanesque ode to the vastness and diversity of the Soviet Union. With short Kino-Pravda No. 19. “If I had to choose the ten best documentaries of all time I’d call it preposterous but if there’s ONE to choose: A Sixth of the World” (Chris Marker). (92 mins)

Wednesday, September 21, 2011
7:30 p.m. A Sixth Part of the World (A Kino-Eye Race around the USSR. Export and Import by the State Trading Organization of the U.S.S.R.)


Friday, September 23, 2011
7:00 p.m. Enthusiasm: Symphony of the Donbass
Dziga Vertov (U.S.S.R., 1930). Introduction by Adelheid Heftberger. Vertov’s first sound film is a masterpiece of Russian avant-garde cinema, disguised as a paean to coal and steel workers, and has inspired directors such as Charlie Chaplin, Joris Ivens, and Wang Bing. (67 mins)

Tuesday, October 25, 2011
7:00 p.m. Kino-Pravda Nos. 14–17
Dziga Vertov (U.S.S.R., 1922–23). Judith Rosenberg on piano. This program features some of Aleksandr Rodchenko’s most ingenious experiments in graphic design, and some of Vertov’s most thrilling images of montage and trick photography, including newspapers bursting into “agit-shells” and a proletarian “Hammer of Knowledge.” With short Soviet Toys. (92 mins)


Tuesday, November 8, 2011
7:00 p.m. The Man with a Movie Camera
Dziga Vertov (U.S.S.R., 1929). PFA Collection Print! Witty, sassy, with an infectious joie de vivre, this ecstatic portrait of a city and its inhabitants demonstrates Vertov's "kino-eye" theory endowing the camera with the flexibility of the human eye—and the associative powers of a poet's brain. (67 mins)

Tuesday, November 15, 2011
7:00 p.m. Stride, Soviet! (The Moscow Soviet in the Present, Past, and Future)
Dziga Vertov (U.S.S.R., 1926). Judith Rosenberg on Piano. Vertov transformed a commission about Moscow elections into this kino-tribute to “the poetry of machines.” Followed by Mikhail Kaufman’s 1929 portrait of man and nature, In Spring. (132 mins)


Sunday, November 20, 2011
2:00 p.m. Three Songs of Lenin
Dziga Vertov (U.S.S.R., 1935/38). Vertov’s three-part masterwork glorifies Lenin’s life and legacy through folkloric songs, tales, and mythologies, but transcends time and politics through art and form. “One of the greatest and most beautiful films I have ever seen” (H.G. Wells). Followed by Lullaby. (125 mins)


Thursday, December 1, 2011
7:00 p.m. The Fall of the Romanov Dynasty
Judith Rosenberg on Piano. A devastating chronicle of Tsarist Russia from the eve of World War I until its brutal demise, Fall comprises hundreds of films that Esfir Shub unearthed and rescued from neglected corners of the Soviet Union, including home movies taken by the Tsar’s own cameramen. (101 mins)


This series is modeled on the recent retrospective curated by professor Yuri Tsivian of the University of Chicago, and Joshua Siegel, associate curator in the Department of Film at the Museum of Modern Art, New York. The majority of 35mm prints presented at the PFA Theater have been generously loaned by the Austrian Film Museum, Vienna. Film notes are by Joshua Siegel, adapted from texts by Yuri Tsivian from the Twenty-Third Pordenone Silent Film Festival catalog. We are indebted to the staff of MoMA and the Austrian Film Museum for their collegial assistance and also wish to acknowledge the generous support of UC Berkeley’s Department of Film and Media and the Institute of Slavic, East European, and Eurasian Studies.

Archival and restored prints and musical accompaniment for silent films presented with support from the Packard Humanities Institute.