Thanks to Henri Langlois: A Centennial Tribute 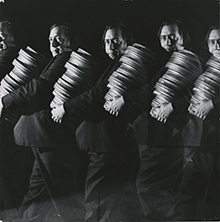 The French film archivist and cinephile Henri Langlois (1914–1977) is a heroic and colorful figure in the history of cinema. As the cofounder of La Cinémathèque française in Paris and as a champion of film culture, he inspired the international cinematheque movement. Indeed, Langlois’s visits to Berkeley in the 1960s and 1970s greatly informed the vision of the Pacific Film Archive, particularly the way our institution exhibits, collects, and makes information about film history available to the public. Today, BAM/PFA’s film department remains true to that original model inspired by Henri Langlois, over forty years ago.

Summer 2015 brings a period of change for our film programs at BAM/PFA. This is our final season in the temporary PFA Theater, which we have occupied since 2000. What could be a more fitting tribute at this time of transition than this series, which celebrates aesthetic achievements in cinema, featuring many films that Langlois helped save for future generations of viewers? This eclectic series presents works that contributed to the development of French silent cinema as well as some by Langlois’s favorite auteurs (Tod Browning, Ernst Lubitsch, Jean Renoir, Erich von Stroheim). Langlois advocated for a cinema that explores the aesthetic possibility of film language and the use of cinema as a means of resistance, principles that we continue to champion as we move ahead into our future.

Wednesday, June 17, 2015
7:30 p.m. Lumière d'été
Jean Grémillon (France, 1943). Imported Print! A remote mountain inn is the setting for a class-crossed love affair split between working class and idle rich. Coscripted by Jacques Prévert, it is acclaimed as one of the greatest French films made during the German Occupation. Followed by excerpts from Parlons cinema—à propos du cinéma dans la résistance. (120 mins)

Friday, June 19, 2015
7:00 p.m. The Steel Beast
Willy Otto Zielke (Germany, 1935). Imported Print! Commissioned to celebrate the anniversary of a rail line in 1935, this film by great German photographer Willy Otto Zielke is a daring collage of abstractions, rhythms, and historical commentary, and was immediately banned by the Nazis. (75 mins)

Friday, June 26, 2015
7:00 p.m. Early Films by Abel Gance
Abel Gance (France, 1915/1916). 35mm Restored Prints! Judith Rosenberg on piano. Two early and rare shorts, The Madness of Doctor Tube and The Deadly Gases, that demonstrate the fledgling skills of the director who would later make one of the silent era’s greatest epics, Napoleon. (83 mins)

Saturday, July 11, 2015
6:30 p.m. Prix de beauté
Augusto Genina (France, 1930). Imported Print! Judith Rosenberg on piano. The last major role for silent-era beauty Louise Brooks (Pandora’s Box) was as a Parisian typist who wins a beauty contest and a movie contract, only to face the violent disapproval of her husband. (108 mins)

Saturday, July 18, 2015
6:30 p.m. La chienne
Jean Renoir (France, 1931). Imported Print! Michel Simon is an unhappily married middle-aged bank clerk whose only passion in life is painting, until he becomes obsessed with a prostitute. Remade by Fritz Lang as Scarlet Street, Renoir’s original is infused with a sadomasochistic sexuality that is both heightened and tempered by Renoir's camera. (100 mins)

Friday, July 24, 2015
8:50 p.m. Queen Kelly
Erich von Stroheim (US, 1931). In a debauched Central European kingdom, a mad queen must wed a notorious libertine, who instead falls for a young nun (Gloria Swanson). One of the most infamous unfinished film maudits in history, and praised as Erich von Stroheim’s masterpiece. (74 mins)


Based on Grâce à Henri Langlois, a touring exhibition originated by La Cinémathèque française (Paris), curated by Samantha Leroy. Our deepest thanks to Director General Serge Toubiana and the staff of La Cinémathèque française, who have made available many archival prints and digital restorations for this centennial tribute. BAM/PFA also wishes to thank the French Cultural Services San Francisco, Les Films du Jeudi, SNC, and Kathy Brew.