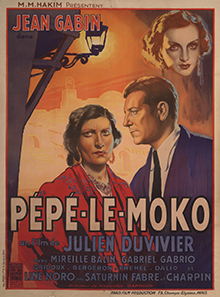 “Genius is just a word; filmmaking is a craft.”—Julien Duvivier

Jean Renoir once proclaimed, “If I were an architect and I had to build a monument to the cinema, I would place a statue of (Julien) Duvivier above the entrance. . . . This great technician, this rigorist, was a poet.” The French director and screenwriter Julien Duvivier (1896–1967), whose astonishingly varied career spanned both Europe and Hollywood, was also championed by Orson Welles, Ingmar Bergman, and Graham Greene. This retrospective offers a rare chance to discover the work of this influential filmmaker.

Working in a darkly poetic realist style—Greene wrote admiringly that “his mood is violent, and belongs to the underside of the stone”—Duvivier made popular melodramas, thrillers, religious epics, comedies, wartime propaganda, musicals, and literary adaptations of novels by Émile Zola, Leo Tolstoy, and Georges Simenon. This exhibition features rarities and revelations, as well as masterpieces starring the great actor Jean Gabin, including La belle équipe (1936), Pépé le Moko (1937), and Deadlier Than the Male (1956). Also featured is Duvivier’s favorite among his films, Poil de Carotte (1932), a heartbreaking chronicle of childhood.

Friday, October 2, 2009
6:30 p.m. The Whirlwind of Paris
Julien Duvivier (France, 1927). Judith Rosenberg on piano. This rare silent features Lil Dagover, a star of German Expressionist cinema, as an opera singer who becomes restless in her marriage and longs to return to the Parisian stage. (108 mins)

Thursday, October 8, 2009
6:30 p.m. Pépé le Moko
Julien Duvivier (France, 1937). Duvivier’s most influential film stars Jean Gabin as a suave Parisian jewel thief who eludes capture by taking refuge in the Casbah. “I cannot remember (a picture) which has succeeded so admirably in raising the thriller to a poetic level.”—Graham Greene (94 mins)

Friday, October 16, 2009
6:30 p.m. La bandera
Julien Duvivier (France, 1935). Duvivier’s sensuous and brooding Foreign Legion melodrama made Jean Gabin a star. “It looks like an exquisite newsreel taken away and baked brown to give you the feel of the air.”—Alistair Cooke (100 mins)

Wednesday, October 21, 2009
7:00 p.m. La fin du jour
Julien Duvivier (France, 1938). One of French cinema’s most poignant, and caustic, portraits of the world of theater depicts an old-age home for destitute actors who wistfully relive their past triumphs and defeats. With Michel Simon, Louis Jouvet, Victor Francen, and other greats. (100 mins)

Thursday, October 29, 2009
6:30 p.m. Holiday for Henrietta
Julien Duvivier (France, 1952). Two screenwriters dispute the fate of their charming heroine in this enchanting classic that sends up the clash between comedy and drama. (118 mins)

Archival prints and musical accompaniment for silent films are presented with support from the Packard Humanities Institute.