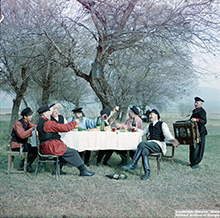 "Discovering Georgian Cinema is the kind of ambitious exhibition that reminds us how much of film history is yet to be written.”—San Francisco Bay Guardian

“Georgian cinema is exotic and, like the mountainous terrain celebrated by the Russian writers Lermontov and Tolstoy, can be forbidding as well as fiercely beautiful. It is also largely unknown.”—New York Times

Discovering Georgian Cinema is truly an opportunity for discovery— a chance to explore the rich cinematic heritage of a place that has produced many wonderful films during the past century. You will encounter an impressive range of stylistic approaches and thematic concerns, from antibureaucratic satires of the Soviet system to philosophical studies rooted in a humanist tradition, as well as lyrical depictions of Georgia’s spectacular landscape. The series was inspired by BAM/PFA’s significant holdings of Soviet Georgian films, which led me to undertake extensive research at archives throughout the world to assemble a selection of the best films for this touring series, the largest retrospective of Georgian film ever mounted in North America.

The retrospective, which includes some fifty programs and will continue through spring 2015, surveys the cinematic tradition that has emerged from this distinctive cultural milieu during the past century. Spotlighting the talents of individual directors, the programs concentrate on three main periods of film production: the wonderfully creative films of the silent era; the flowering of narrative filmmaking that began in the mid-fifties with Tengiz Abuladze and Rezo Chkheidze’s award-winning Magdana’s Donkey and is well represented here by a concentration of films from the 1960s to the 1980s; and the new wave of Georgian cinema, which demonstrates the talents of the young filmmaking
community today.

Sunday, September 28, 2014
4:00 p.m. Repentance
Tengiz Abuladze (USSR, 1984/1987). Imported 35mm Print! Nana Janelidze in person. One of the first Russian films to deal with the terrors of the Stalin era, Repentance combines symbolism and surrealism for this look at a paranoid dictator. “Mordantly funny . . . as artful as it is sobering” (NY Times). (153 mins)

Monday, September 29, 2014
7:00 p.m. An Unusual Exhibition
Eldar Shengelaia (USSR, 1968). Eldar Shengelaia in person. A sculptor aspires to a life of creativity, but finds reality—in the form of conformity, bureaucracy, and compromise—far more difficult. A tragicomedy of daily proportions, and one of Georgian cinema’s best-received works. (96 mins)

Tuesday, September 30, 2014
7:00 p.m. Will There Be a Theater Up There?!
Nana Janelidze (Georgia, 2011). Bay Area Premiere! Nana Janelidze in person. Part historical essay, part re-created biography this film uses the tragic circumstances of the twentieth century as a backdrop for the chronicle of a Georgian family. Preceded by Janelidze’s The Family. (80 mins)

Saturday, November 1, 2014
6:00 p.m. The Wishing Tree
Tengiz Abuladze (USSR, 1977). Over twenty stories make up this episodic Georgian pastorale, set in the pre-Revolutionary birthplace of the famous painter Pirosmani. “Coordinated with the utmost consideration for what pleases the eye” (Hollywood Reporter). (108 mins)


Tuesday, November 18, 2014
7:00 p.m. Blind Dates
Levan Koguashvili (Georgia, 2013). Levan Koguashvili in person. A forty-something bachelor seeks true love, even if he is still living at home with his parents, in this whimsical Georgian love story. (95 mins)

Thursday, November 20, 2014
8:45 p.m. Khabarda
Mikheil Chiaureli (USSR, 1931). Imported Print! Introduced by Nikolay Mikhailovich Borodachev and Peter Bagrov. Judith Rosenberg on piano. Set in Tbilisi, Khabarda is a satire that plays on the tension between petit bourgeois values and the incoming sweep of Communist ideology. Another rare, rediscovered find from the archives of Gosfilmofond. (64 mins)

Saturday, November 22, 2014
6:30 p.m. Salt for Svanetia
Mikhail Kalatozov (USSR, 1930). Judith Rosenberg on piano. A snowbound, rock-hewn village in the harsh Caucasus is the setting for his bracing, rhythmically cut early masterpiece from the director of I Am Cuba. Nature, politics, and cinema combine in this salute to “the dynamic sublime.” (66 mins)

Saturday, November 22, 2014
8:00 p.m. A Nail in the Boot
Mikhail Kalatozov (USSR, 1930/1932). Imported Print! Judith Rosenberg on piano. The saying “For want of a nail, a war was lost” is brought to dynamic, stirring life in this rapid-fire look at the Red Army. Another early masterpiece from the director of I Am Cuba. Followed by Patrick Cazal’s documentary on the director, Hurricane Kalatozov (2010). (128 mins)

Saturday, November 29, 2014
5:30 p.m. I Am Cuba
Mikhail Kalatozov (Cuba/USSR, 1964). Made in 1962 as an act of Soviet-Cuban friendship, and written by Yevgeny Yevtushenko, this is an extraordinary example of "pure" cinema in the service of politics. "A deliriously one-of-a-kind movie, wildly schizophrenic in its bizarre mix of Slavic solemnity and Latin sensuality" (Telluride Film Festival). (138 mins)

Saturday, December 6, 2014
6:00 p.m. Flight of the Sparrows
Teimur Babluani (USSR, 1980) New 35mm Print! A fistfight on a crowded train triggers something far larger in this intriguing Georgian allegory, one of Georgian cinema’s standout works of the eighties. (60 mins)

Sunday, December 7, 2014
4:00 p.m. The Swimmer
Irakli Kvirikadze (USSR, 1984). An amusing and artfully crafted tale of three generations of long-distance swimmers, and the several decades of Georgian history their lives represent. Preceded by Kirikadze’s The Jar (1971), which transposes Pirandello’s story to rural Georgia. (134 mins)

Saturday, January 24, 2015
6:30 p.m. Falling Leaves
Otar Iosseliani (USSR, 1967). A young boy gets his first job (in a wine factory!), and soon observes that corruption is the best way to get by. Falling Leaves is typical of the best Georgian films in seeming light and low-key at first, until the satire begins to cut very deep. (91 mins)

Saturday, January 24, 2015
8:15 p.m. Once Upon a Time There Was a Singing Blackbird
Otar Iosseliani (USSR, 1971). Iosseliani’s wry comedy, set in Tbilisi, follows a young musician who is perpetually in a hurry and late for every appointment because his life is so full of chance encounters. A genial, uplifting song to all those who choose life and love over lesser things, like work. (80 mins)

Sunday, February 1, 2015
2:00 p.m. The Day Is Longer Than the Night
Lana Gogoberidze (USSR, 1984). Imported Print! Lana Gogoberidze in person. The history of Georgia in the twentieth century is reimagined through the life and times of woman in Lana Gogoberidz’s moving drama, which premiered at Cannes in 1984. (105 mins)

Saturday, February 7, 2015
8:30 p.m. My Grandmother
Kote Mikaberidze (USSR, 1929). Gogol meets Chaplin in this riotous, scathingly antibureaucratic satire, one of the eccentric high points of Soviet silent cinema. Stop-motion bits of puppetry and animation, as well as expressionist decor and camera angles, make My Grandmother seem like a blast from the future, not the past. (65 mins)

Saturday, February 28, 2015
5:45 p.m. Repentance
Tengiz Abuladze (USSR, 1984/1987). Imported 35mm Print! Back by Popular Demand! One of the first Russian films to deal with the terrors of the Stalin era, Repentance combines symbolism and surrealism for this look at a paranoid dictator. “Mordantly funny . . . as artful as it is sobering” (NY Times). (153 mins)

Wednesday, March 4, 2015
7:30 p.m. The Color of Pomegranates
Sergei Paradjanov (USSR, 1969). 4K Digital Restoration! Introduced by Harsha Ram. A brilliant and magical work that reimagines Armenian history and culture through the life and writings of its greatest poet. "Watching . . . The Color of Pomegranates is like opening a door and walking into another dimension, where time has stopped and beauty has been unleashed” (Martin Scorsese).

Saturday, March 21, 2015
6:30 p.m. The Way Home
Aleksandr Rekhviashvili (USSR, 1981/1987). Inspired by Pasolini, this example of Georgian cinema in the eighties takes the viewer along some peculiar roads and across a unique landscape: Georgian history and legend, politics and social stratification, religion and ethics. (83 mins)

Saturday, March 21, 2015
8:15 p.m. The Nylon Christmas Tree
Rezo Esadze (USSR, 1985). Imported Print! A group of mismatched travelers gather to take a bus on New Year’s Eve in actor/director Rezo Esadze’s work of allegorical realism, which uses one night, and one setting, to investigate the moral and social quandaries of Georgia, circa 1985. (78 mins)

Sunday, March 22, 2015
3:00 p.m. The Bittersweet Films of Mikhail Kobakhidze
Mikhail Kobakhidze (USSR/France, 1967–2001). Recommended for ages 8 & up. Free for members. A selection of short allegorical films that recall the work of Buster Keaton, Jacques Tati, and Albert Lamorisse. Titles include The Musicians, The Wedding, The Umbrella, and En Chemin. (61 mins)

Saturday, April 4, 2015
8:15 p.m. The Last Crusaders
Siko Dolidze (USSR, 1934). Judith Rosenberg on piano. Ethnographic footage of the remote Khevsuri culture forms a scenic backdrop to this class-struggle drama involving a young Khevsuri, murdered after returning from the big city, and his brother’s quest for vengeance. (68 mins)

The retrospective at BAM/PFA is supported in part by the Andy Warhol Foundation for the Visual Arts Curatorial Fellowship program, which allowed for extensive research, and the National Endowment for the Arts, which helped underwrite the touring series organized by BAM/PFA. We wish to thank our community partners, the San Francisco Silent Film Festival, Kitka Women's Vocal Ensemble, the Institute of Slavic, East European, and Eurasian Studies, and the Department of Music at UC Berkeley for their support. 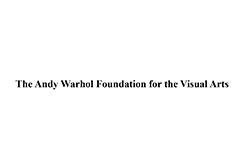