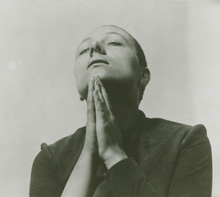 The Passion of Joan of Arc, December 2 at Paramount Theatre, Oakland

“Through style one infuses a film with a soul, and that is what makes it art,” wrote the Danish director Carl Theodor Dreyer. Throughout his career, which spanned the silent era to sound and comedies, epics, and melodramas to the searing chamber pieces for which he is best known, Dreyer infused every film he made with a soul, and in the process created a body of work acclaimed as one of the greatest of all time.

“When he speaks, it is with such subdued tranquility, one is forced to listen,” says one character about another in Dreyer’s Gertrud, a quote which tellingly applies more to the director himself. “He loves stillness, an inspirational stillness.” Casting an almost hypnotic glaze over many of Dreyer’s films, the austere long takes, still camera, elemental set designs, and frequent absence of a soundtrack strip away the unnecessary and turn what’s left—emotion, human contact, faith, and love—into almost hallucinatory forces.

"Dreyer's work is always based on the beauty of the image, which in turn is a record of the luminous conviction and independence of human beings. His films are devoted principally to human emotions,” wrote David Thomson in his New Biographical Dictionary of Film. “Dreyer's greatness is in the way that he makes a tranquil picture of overwhelming feelings."

Friday, November 5, 2010
7:00 p.m. Day of Wrath
Carl Th. Dreyer (Denmark, 1943). A medieval witch trial provides a scathing metaphor for Dreyer’s fusion of Hawthorne and Kafka, filmed during the Nazi occupation of Denmark. “This psychological masterpiece...is one of the most completely moving films ever made."—Pauline Kael. (95 mins)

Sunday, November 7, 2010
4:15 p.m. Love One Another
Carl Th. Dreyer (Germany, 1922). During the Russian Revolution of 1905, a young Jewish schoolgirl fights for the Revolution—and her Jewish identity—in Dreyer’s historical drama, filmed in Berlin with actors from Max Reinhardt’s famous company and refugees from the 1917 Revolution. (84 mins)

Sunday, November 14, 2010
2:00 p.m. Once Upon a Time
Carl Th. Dreyer (Denmark, 1922). In Dreyer’s delightful medieval fairy tale of royals, commoners, assumed identities, wood nymphs, and confessions of love, a spoiled princess sends most of her suitors to the hangman until a prince arrives with a most unlikely scheme to win her heart. An eye-opening taste of silent cinema at its lightest and most entertaining. With short Bride of Glomdal. (134 mins, plus 15-minute introduction)

Saturday, November 20, 2010
6:30 p.m. The Master of the House
Carl Th. Dreyer (Denmark, 1925). Dreyer’s “realist comedy” turns its attention to the dramas, passions, and furies found within an everyday worker’s flat, and follows a blustery husband’s eventual downfall at the hands of his wife and other women. “Full of the most precise and most beautiful details from the daily life at the beginning of the century.”—Jonas Mekas. (105mins)

Sunday, November 21, 2010
2:00 p.m. Leaves From Satan’s Book
Carl Th. Dreyer (Denmark, 1919). This through-the-ages epic, inspired by Griffith’s Intolerance, tracks the influence of Satan on human betrayal and sin, whether in the time of Christ, the Spanish Inquisition, the French Revolution, or during Finland’s 1918 Civil War. “Dreyer’s daring use of psychologically penetrating close-ups still seems decades ahead of its time.” —Dave Kehr. (150 mins)

Sunday, November 28, 2010
4:50 p.m. Ordet
Carl Th. Dreyer (Denmark, 1955). Faith, madness, life, and miracles are portrayed through the life one farming family in Dreyer’s transcendental investigation of organized religion, personal faith, and humanity. Voted one of the greatest films of all time in a Sight and Sound poll. “A masterpiece. It is of awesome dimensions—a film about Christianity made with an intensity that achieves exaltation.”—Sunday Telegraph. (126 mins)

Thursday, December 2, 2010
7:30 p.m. Voices of Light/The Passion of Joan of Arc
At the Paramount Theatre, Oakland
Carl Th. Dreyer (France, 1928). Dreyer’s masterpiece—often named as one of the top ten films of all time, and with hallucinatory close-ups more avant-garde than ever—is paired with a live performance of Richard Einhorn’s acclaimed composition for solo voices, chorus, and orchestra. “An overwhelming experience.”—Chicago Tribune. “Dreyer and Einhorn together create a harrowing and exalting symbiosis that, once encountered, cannot soon be forgotten.”—Washington Post. (81 mins)

Friday, December 3, 2010
8:40 p.m.  Vampyr
Carl Th. Dreyer (France/Germany, 1931). A stranger arrives in a village haunted by someone, or something, in one of the greatest horror films ever made, a favorite of Hitchcock (“the only film worth seeing twice”), Mario Bava, and Guillermo del Toro.. “All talk of emotional and psychological content in the horror genre begins with Vampyr.”—David Bordwell. (75 mins)

Friday, December 10, 2010
7:00 p.m. Two People
Carl Th. Dreyer (Sweden, 1944-45). Dreyer’s rarest film is a two-person character study of a dissolving marriage, constructed around the events of a single day. Dreyer withdrew it from theaters and refused to let it be shown during his lifetime. With short They Caught the Ferry. (86 mins)

Sunday, December 12, 2010
5:00 p.m. Gertrud
Carl Th. Dreyer (Denmark, 1964). One woman’s pursuit of—or escape from—a love without borders is the heart of Dreyer’s final film, one of the most profound in cinema. In hushed tones and overly staged scenes, Dreyer strips away excess movement or sound, and leaves us only with emotion, desire, and sorrow. “Equal, in madness and beauty, to the last works of Beethoven.”—Jean-Luc Godard. “A film of complete purity and something like perfection.”—David Robinson. (115 mins)

Archival and restored prints and musical accompaniment for silent films are presented with support from the Packard Humanities Institute.