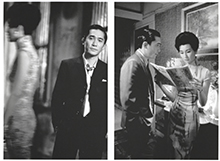 
(Fa yeung nin wa). Supposedly the most universally acclaimed film of the twenty-first century, Wong Kar-wai’s In the Mood for Love seems like it has been around for decades; even when it debuted in 2000, however, the film—set in the early 1960s—already seemed timeless. “This film is not verbal,” said Wong about the way it effortlessly captures an essence of romance and melancholy, as showcased in the lives of two neighbors (Maggie Cheung and Tony Leung Chiu-wai) who are “in the mood for love,” yet too proper to act on it. “Everything is expressed through the body, through the people, how they walk, how they move.”