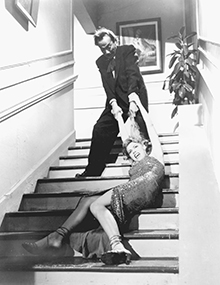 
(The Adventuress). The genre of moody musical melodramas known as rumberas could be kitsch but they were far from comedies. The films, like their heroines on screen, were socially condemned by the middle class, becoming forbidden pleasures for their cult following. Aventurera is considered the epitome of the genre and features a dynamic performance by the Cuban rumba dancer Ninón Sevilla, the queen of the cabareteras, cast against Andrea Palma. Sevilla was famous for her angry outbursts, which are well used in a film that presents a devastating indictment of bourgeois hypocrisy.