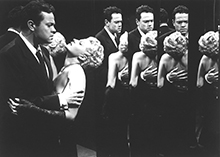 
Welles turned a mediocre novel into a brilliant film by overturning all the expectations of the crime thriller. Although the film remains an absorbing intrigue—the story of a murder plan that unfolds as a yacht makes its luxurious way along the Pacific—every scene is a showcase for Welles’s cinematic inventiveness, and the whole adds up to a significant statement on the evils of money lust. Welles pulled off a coup by casting himself as a totally sympathetic character, an Irish sailor with humanitarian politics who becomes a pawn in the game of the greedy rich.