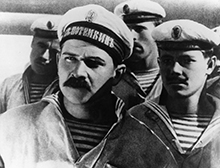 
(Bronenosets Potyomkin). Instructed to make a film to commemorate the 1905 revolution, Sergei Eisenstein chose to base his script on the mutiny on the battleship Potemkin of the Black Sea Fleet and the ensuing involvement of the people of Odessa. The sailors’ revolt against being served maggoty meat is both premise and metaphor for a tale told virtually entirely through images and their rhythmic juxtaposition and repetition, the purest cinema imaginable; the massacre on the Odessa steps is justifiably one of the most celebrated sequences in film history.