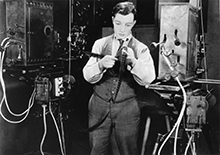 
Sherlock Jr. is Keaton's most enduring commentary on the cinema, the beautiful machine that has the power to make artists of us all. Buster plays a projectionist who dreams his way onto the screen and into a movie in which he resolves the conflicts of his own life. As early as 1925 Sherlock Jr. was recognized by René Clair for its Pirandello-like dramatic structure, and it was much admired by the French Surrealists. The film is equally impressive for Keaton's brilliantly modulated acrobatics—offscreen, the hapless hero hoists himself on his own banana peel, but on, he can ride on the handlebars of a driverless motorcycle, make a boat out of a car, and perform any number of cinematic miracles without special effects.