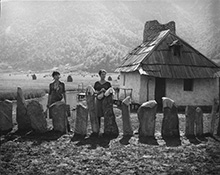 
(Didi mtsvane veli, aka Great Green Valley). The modern world comes to a forsaken section of the Soviet empire in Merab Kokochashvili’s neorealist village drama, one of the most singularly pessimistic works of sixties Soviet film. “Whether he likes it or not, life will bring him here,” states a collective figurehead outside a newly built worker’s hall; he’s referring to our hero Sosana, a burly sheepherder who could care less about answering to anyone, much less living in the modern new town going up nearby. But oil is coming, and with it changes that will leave Sosana with little choice. “Is everything lost forever?” he wonders, as he wanders through the region’s constant fog. Voicing the film’s underlying theme of hopelessness, his wife, meanwhile, can only mutter, “I don’t want to die in this godforsaken place.” Offering neither John Ford-like optimism nor Communist-era visions of collective good, and created during a brief thaw in Soviet censorship, Big Green Valley is refreshingly, almost shockingly unsentimental, and a willful thumb in the eye to both progress and tradition.