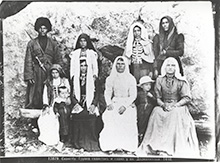 (Seule, Georgie). Otar Iosseliani's fascinating four-hour documentary presents the history of this former Soviet republic through interwoven images of landscapes, artwork, footage from the civil war, and clips from other Georgian filmmakers’ films. “He illuminates the part played by two politicians, both KGB men but with very different destinies: Gamashurdia, an ultranationalistic demagogue who died in exile; and Shevernadze, who would become president of Georgia. Alone, Georgia gives a spellbinding evocation of this beautiful, hospitable land, and of its culture, which has had a profound influence on other countries, notably Russia, whose best writers, from Tolstoy to Pasternak, have revered the Georgian people and their arts”(Olga Andreyev Carlisle).