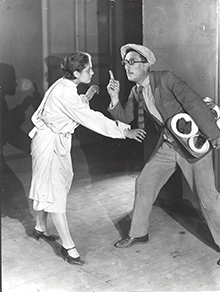 (Moya Babushka/Chemi Bebia). Gogol meets Charlie Chaplin in this riotous, scathingly anti-bureaucratic satire. My Grandmother is a genuine piece of grotesquerie descended from the Soviet Eccentric Cinema (FEKS) of the twenties. For invention, it matches any film of the French avant-garde, taking in all kinds of advanced filmic devices such as stop-motion, bits of puppetry, and animation, as well as expressionist decor and camera angles. The energetic music track will have you dancing a Soviet-style Charleston along with the film's most memorable character, a wide-eyed, wild-haired bureaucrat's wife who is caught up in a frenzy of bourgeois living. Her equally comic husband personifies the indolence, irrelevance, and obduracy of a state system that resembles nothing so much as a giant scoreboard, winding down. When he loses his job, he learns the true value of a "grandmother"—a slang term for the patronage and privilege that keep the machine greased. What are we to think when, at the film's end, he is reprimanded by a Lenin-like worker, shot from the ground so that he looks ten feet tall? Suppressed for half a century, this irreverent blast has lost none of its immediacy.