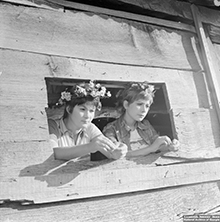 “The Soviet Republic of Georgia, located in the Caucasus, is about three hours by plane from Moscow; but from its movies Georgia seems closer to Italy. Rich in cultural detail, the best Georgian films are usually gentle satires (resembling early Olmi or the best Czech films) or poetic meditations on national traditions. Otar Iosseliani is their greatest director . . . an ironic commentator on ordinary life in a very extraordinary corner of the U.S.S.R.” (Tom Luddy, SFIFF 1983). Set in a rural Georgian village, “Pastorale is very much a tone-poem. Iosseliani’s sharp perceptions are constantly aimed toward sardonic juxtapositions, in the subtlest sense, to establish those wistful ironies of human behavior that exist when cultural patterns coexist behind invisible barriers . . . The village is not at all cozy-cute, but unflinchingly grubby; the mud, poverty, insouciant pigs, goats, and chickens, plus the eternal outhouse, are just there—the labor, too, for the women do everything without modern conveniences” (Albert Johnson).