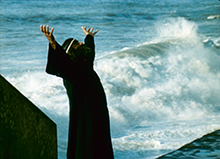 (Plovets/Motsurave). The amusing and artfully crafted tale of three generations of long-distance swimmers, told from the perspective of the grandson, Anton Dumbadze. The legendary grandfather, Dumishkan Dumbadze, and his son, Dometi, were each obsessed with the idea of crossing the Black Sea from Batumi to Poti, double the distance of the English Channel! Filled with alluring glimpses of Georgian folklore, the film also presents a critique of Stalinist purges that is searingly direct. The Swimmer had a fitful history: it was shot in 1981, but postproduction was interrupted before a Georgian version could be completed; a shortened cut was released three years later.