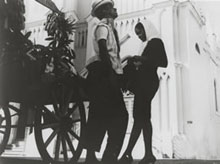 (Soy Cuba/Ja Kuba). Here is an extraordinary example of “pure” cinema in the service of politics. “A true film maudit. Impossible to see in Cuba (where it was called I Am NOT Cuba), and scorned in Russia as agitprop kitsch, I Am Cuba was made in 1962 as an act of Soviet-Cuban friendship. Yevgeny Yevtushenko gets credit for the film’s poetic structure—a loose series of choreographed tableaux in praise of the revolutionary spirit. It is also a deliriously one-of-a-kind movie, wildly schizophrenic in its bizarre mix of Slavic solemnity and Latin sensuality” (Tom Luddy, Telluride Film Festival). “The most brilliant Soviet film since the 1920s. Kalatozov and cinematographer Sergei Urusevsky have . . . realized Eisenstein’s dream: an epic of the revolutionary struggle of the oppressed Latin American masses, using visual images and nearly no dialogue. (They) have used their ‘emotional camera’ to an extent which has to be seen to be believed, using handheld camera, wide-angle lenses, oddly tilted angles . . . and elaborate crane shots” (Steven P. Hill, Film Quarterly).