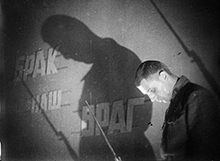 
(Gvozd’ v sapoge/Lursmani cheqmashi). Ostensibly an allegory on Soviet industry, as symbolized by the poor quality of a nail in a soldier’s boot that leads to the defeat of a military unit on maneuvers, this film was banned, its symbolism lost on literal-minded authorities who felt it reflected poorly on the military preparedness of the Red Army. But perhaps more threatening than its subject was its style: “The film came at a time when other directors had already begun to feel the chill of criticism for abstract films” (Alexander Birkos, Soviet Cinema). Indeed, the camera offers nothing less than a study of fate, as personified by the hapless wearer of the eponymous boot. In the midst of the thrusts and explosions of war (cinematically rendered), here he is, as in a dream, on a lone journey across fields and mountains with only one good shoe, until he comes to an interminable, impassible barbed-wire fence lined with jangling tin cans (we can “hear” them in the silence). More Kafkaesque is his court martial, a “show trial” in every sense as a marching band performs in the courtroom. This extraordinarily beautiful film led to a seven-year period of inactivity for Kalatozov.

A documentary on the life and work of Mikhail Kalatozov made by Patrick Cazals, who has directed a series of documentaries on Tbilisi-born filmmakers, including Sergei Paradjanov and Rouben Mamoulian.

(74 mins, In Georgian and French with English subtitles, Color, DCP, from the artist)