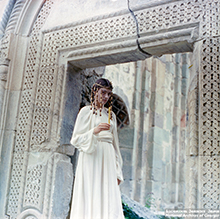 (Natris khe/Drevo zhelanii). The textures of folk legend and striking visual allegory permeate The Wishing Tree, an episodic pastorale set in a pre-revolutionary Georgian village and spanning four seasons in the lives of various village characters. Some twenty-two stories are woven into the narrative, which centers on a beautiful young woman who is forced to marry a man she does not love; her unsanctioned love for another leads her to ritual disgrace and sacrifice. Also tragic is the tale of a village eccentric (one of many) in constant search of a legendary tree that will make miracles happen—a tree to be found only in death. Death opens the film—in the image of a horse, lying dying in a field of poppies—and death closes it, but in between The Wishing Tree is abundant with life. In this village, strangely beautiful in its ancient dilapidation, robust humor and tragedy, like good and evil, blend into a whole. The story by Georgi Leonidze on which The Wishing Tree is based is set in the village of Kachetien, the birthplace of the famous painter Pirosmani. Drawing on Pirosmani’s vision, as well as on Brueghel, Abuladze creates a visual palette that is rich in composition and manifold in meaning.

• Written by Abuladze, Revas Inanishvili, based on a story by Georgi Leonidze. Photographed by Lomer Ahvlediani. With Lika Davtaradze, Sosso Dchatchvliani, Sasa Kolelichvili. (108 mins, In Georgian with English subtitles, Color, 35mm, From MoMA)