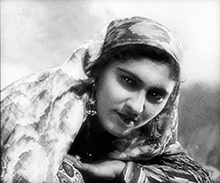 (Elisso). This historical epic evokes the tragic fate of a nation pacified in 1864 by the Tsarist Russian Empire. When authorities begin to appropriate arable lands, the peasants are forced to evacuate under terrible conditions. In the village of Verdi, we find Eliso, whose love for Vazho is encumbered by differences of class and religion. Yet the most overwhelming passion in this cherished classic is the depiction of Georgia’s majestic landscape and the deep-rooted traditions of its people. One of the great early figures in Georgian cinema, Nikoloz Shengelaia was the head of an enormously influential family of film professionals. The clan included not only his wife, the celebrated actress Nato Vachnadze, and their sons, Eldar and Giorgi, who became prominent directors; but also Vachnadze’s sister, Kira Andronikashvili, who stars in Eliso.