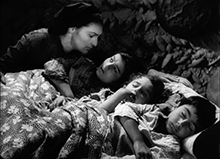 (Lurdzha Magdana/Magdanas lurja). A first film by two young filmmakers, Tengiz Abuladze and Rezo Chkheidze , fresh out of the Institute of Cinematography in Moscow, this charming folk tale was hailed as the start of a “new wave” in Soviet cinema; winning the Grand Prix at Cannes, it was the first Georgian film to have an impact outside the USSR. In the 1890s, in a Georgian village high above a teeming town, the widow Magdana lives in a shack with her three children; walking to the town along dirt roads and rocky hillsides, she ekes out a living selling yogurt. When her children find a donkey lying by the road and nurse it to health, it seems the family’s troubles are over, but the incident serves to bring out the venality of the village leaders and the court system, which sides with the donkey’s cruel owner. In its stunning black-and-white cinematography—in which shadows spread from the bright light of the arid countryside, and silhouettes form against a cloud-cast sky—and the extreme angularity of the shooting, Magdana’s Donkey recalls the cinematographic drama of the classic Soviet silents. But here it is updated with a concern for dramatic incident and the bizarreness of local characters, and for the beauty and lasting reality of regional culture.