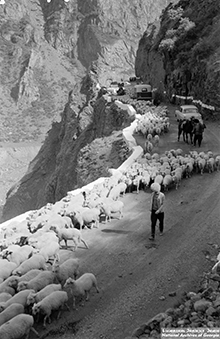 
(Tetri karavani/Belyi karavan). A work that certainly deserves to be better known, The White Caravan has a commonality with the moral codes found in the Western genre. Against a rugged landscape and the forces of nature, a group of shepherds, led by the experienced Martia and his sons, move their flock to winter pastures. The rural way of life is contrasted with the lure of the big city, and one character’s decision to break with tradition ultimately comes to haunt him. The film makes striking use of cinematography, especially during a dramatic windstorm sequence, which also showcases expressive editing techniques. Meliava and Shengelaia’s film was entered into the 1964 Cannes Film Festival.