Sleeping Sickness
Oslo, August 31
The Double Steps
The Waiting Room
Blink of an Eye
People Mountain People Sea
Tokyo Waka
Tokyo Waka
The Source
Valley of Saints
An Oversimplification of Her Beauty
Informant
Women with Cows
Bonsái
Bitter Seeds
The Law in These Parts
The Day He Arrives
Crulic—The Path to Beyond
Crulic—The Path to Beyond
Found Memories
Patience (After Sebald)
Old Dog
It’s the Earth Not the Moon
Ethel
Smugglers' Songs
Back to Stay
Step Up to the Plate
A Secret World
Marina Abramovic: The Artist Is Present
Unfair World
Pierre Rissient: Man of Cinema
¡Vivan las antipodas!
Golden Slumbers
OK, Enough, Goodbye.
Last Winter
In My Mother’s Arms
Meanwhile in Mamelodi
Last Call at the Oasis 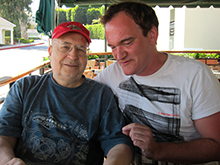 
Even his greatest admirers, such as James Toback, Hou Hsaio-Hsien, and the late Sidney Pollack, have had a hard time explaining exactly what it is Pierre Rissient does for a living. A fixture at the Cannes Film Festival, Rissient wields the kind of influence that lands an unknown talent such as the young Jane Campion a slot in the festival’s program. Passionate and charming, Rissient is beloved for his uncompromising attitude: “It is not enough to like a film. You must like it for the right reasons.” This year’s recipient of the Mel Novikoff Award began his fortuitous career as a Parisian film buff and then a publicist, which led to distributing films with Bertrand Tavernier. They only took on films they loved, defining tastes and launching movements. Rissient got involved in making films as assistant director on Claude Chabrol’s Les Cousins and Jean-Luc Godard’s Breathless (he describes Godard’s style of radical jump cuts as an accidental discovery), and later directed a couple of deeply personal works. This casual, unabashedly affectionate documentary, filled with anecdotes from Abbas Kiarostami, Clint Eastwood, Olivier Assayas, and Quentin Tarantino, as well as plenty of Rissient’s own droll recollections, is an inspiring portrait of a unique character—and an illuminating peek at the inner workings of the international film scene.


Tickets on sale March 30. Online tickets are available through the SFFS ticketing system. Follow the link below and select "buy tickets." BAM/PFA members receive a discount online by using a special promo code. If you are a member and did not receive the code by email, please call (510) 642-1412.


Advance tickets March 27–30. BAM/PFA members may purchase advance tickets online between March 27 and 30 by clicking the link below and entering a special promo code. If you are a member and did not receive the code by email, please call (510) 642-1412.