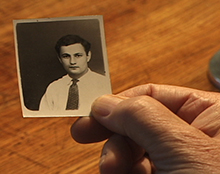 
Lynne Sachs has been making films for twenty-five years, shifting between short, lyrical works and longer experimental documentaries, all distinguished by her beautiful camerawork and poetic associations. Her most recent film, The Last Happy Day, is a portrait of a distant cousin, Sandor Lenard, whose life was shaped by war and marked by his unusual pursuits. A Jewish doctor living in Hungary, he fled the Nazis in 1938, relocating to Italy. After he later moved to Brazil, he translated Winnie the Pooh into Latin. His story is revealed through letters and interviews, punctuated by scenes from Winnie the Pooh acted out by Sachs’s children and their friends. Which Way Is East, made fifteen years earlier, chronicles Sachs’s trip to Vietnam to visit her sister Dana; the pair traveled together from Ho Chi Minh City to Hanoi. Impressionistic yet keenly observed, the film reveals details of life during and after the Vietnam War, interspersed with Vietnamese proverbs and voice-over remarks by both Lynne and Dana as well as Vietnamese friends. Both films are part of a larger series, I Am Not a War Photographer, and along with the short cine-poem Tornado, they provide unique perspectives on the personal impact of war.

Lynne Sachs: States of Belonging, a four-part retrospective of the filmmaker’s work, is presented as a collaboration among San Francisco Cinematheque, the Pacific Film Archive, Other Cinema, and Oddball Film + Video, April 10 through 14. The series is accompanied by a limited-edition monograph available at the screenings. For further information, visit www.sfcinematheque.org.