Before the Revolution
Jonah Who Will Be 25 in the Year 2000
A Grin Without a Cat
La Chinoise
The Battle of Algiers
1973
1973
The Man Who Left His Will on Film
The Revolutionary
Queimada!
Z
La Commune (Paris, 1871)
Society of the Spectacle 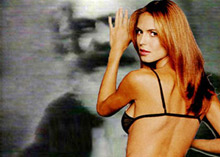 
Ken Knabb is a renowned Situationist scholar. Among the books translated and edited by Knabb are: Situationist International Anthology (revised, 2006), Guy Debord: Complete Cinematic Works (2003), and Guy Debord: The Society of the Spectacle (newly translated, 2004).

The Situationists, a political avant-garde with roots in Marxism, were visibly active in the days leading to the occupation of the Sorbonne in May 1968. Guy Debord, their reigning theoretician, had published his seminal work, Society of the Spectacle, in 1967, giving the movement an all-encompassing logic. Debord’s 1973 essayistic film of the same name could be described as a translation, but this is to under-appreciate the work. Society of the Spectacle is both an adaptation and a provocative example of a favored tactic, détournement. Defined as “the reuse of already existing artistic elements in a new ensemble,” this ploy engages the familiarity of popular images while subverting their embedded ideology. The motive is not to win over the spectator, but to collapse alienated forms of communication. Society of the Spectacle is a complex montage constructed of detourned images from feature films, newsreels, porn, news footage, and commercials. Debord’s analysis of a society suspended inside the free space of the commodity infiltrates every frame. Drawing on Ken Knabb’s translation, Konrad Steiner and Dore Bowen have re-recorded the voiceover, adding new legibility to Debord’s great film.