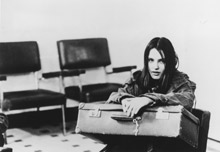 
(L'eau froide). Few passages in cinema capture the aimless drift and constantly shafted expectations of teenage life more than a half-hour sequence in this melancholically beautiful film, which takes its inspiration from Assayas's own adolescence. The scene in question, an all-night party of nocturnal flames and loud rock music in the shell of an abandoned country home, functions as the film's centerpiece and the characters' emotional peak. Troubled beauty Christine (Virginie Ledoyen) and her equally rebellious boyfriend Giles (Cyprien Fouquet), looking to escape the stench of adults (Christine's father tries to commit her to a mental hospital, while Giles's looks to send him off to boarding school), set off on their own adolescent odyssey, and find what seems to be their only happiness in that long night of freedom. As dawn breaks, cold reality must return. With a soundtrack of Leonard Cohen, Alice Cooper, and others, and "shot with a raw, loose naturalism, Cold Water is by turns mournful and exhilarating, tender and harsh" (Gavin Smith).