The Invention of the Western Film

Trail of the Vigilantes: Free Screening!
The Big Trail
The Last Outlaw
My Darling Clementine
Pursued
Forty Guns
3:10 to Yuma
Thomas Ince and the Origins of the Western
Redskin
Stagecoach
She Wore a Yellow Ribbon
Destry Rides Again
Duel in the Sun
Ride Lonesome
The Searchers
Lonely Are the Brave
The Wild Bunch 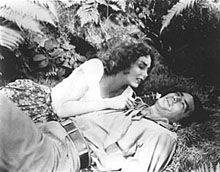 The Invention of the Western Film

Passion and furor swirl around Duel in the Sun, King Vidor and David O. Selznick's Technicolor Western (seen here in a stunning restoration of the "roadshow" version, undertaken at Disney). It's hard to say whether there was more passion on screen (with its exhilaratingly excessive bang-bang-kiss-kiss climax), from outraged critics (who dubbed the film "Lust in the Dust"), or behind the camera (with Vidor quitting after one too many personally delivered memos from producer and credited scriptwriter Selznick). To bring to the screen what remains the top box-office Western (in inflation-adjusted dollars), Selznick ultimately employed another eight directors. It's a lurid tale of a young "half-breed" (Jennifer Jones) who, after the execution of her father for the murder of her Indian mother, is adopted into the household of a pioneering cattle baron (Lionel Barrymore), his wife (Lillian Gish), and their temperamentally opposite sons (hotheaded Gregory Peck and rational Joseph Cotten). Whatever the contributions of others, the film's delirious pitch is recognizably in Vidor's best postwar mode. In an attempt to quell the censorship furor, Duel was cut by nine minutes before wide release.