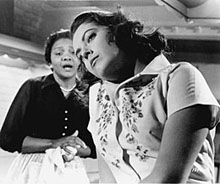 Imitation of Life is Sirk's most titanic film: massive and flawed, its faults overcome by the very largeness of its successes. It is also one of the most moving American films ever made. Sirk subtly induces the audience to turn against the bland respectability of Lana Turner and Sandra Dee, the nominal leads, and draws us into an underworld of backstairs, neonized gutters, and assembly-line chorus-lines with an exploited black maid (Juanita Moore) and her daughter (Susan Kohner). (Both Moore and Kohner received Oscar nominations.) The film's true emotional dynamics burst forth at the end in a Sirkian apocalypse—a black mass for all the lost chances and futile desperations that form the core of his films.