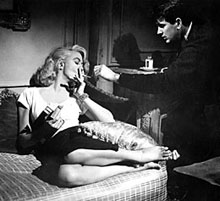 Featuring the same principals as Written on the Wind, and adapted by the same writer (from William Faulkner's novel Pylon), Tarnished Angels plays out many of the earlier movie's themes—obsession, jealousy, self-destruction, defeat—but in a different key. Hysterical Technicolor affluence is replaced here by marginal Depression-era Americana, shot in lush, melancholy black-and-white. Rock Hudson gives one of his best performances as a New Orleans newspaperman who develops an unprofessional fascination with carnival flier Robert Stack and his wife Dorothy Malone, a blonde in a pure white dress who's made a profession of falling. Hudson's passivity is an effective counterpoint to Stack's characteristic desperation; although Hudson calls Malone a creature from another planet, the shadows under her eyes mark her as all too human. The film is best experienced on the big screen, where the sweep of CinemaScope gives visceral impact to the film's fatalistic circularity, the camera repeating the fliers' compulsive loop around the pylons, chasing oblivion.