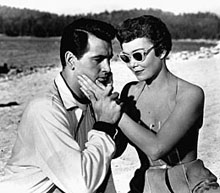 The impossible plot of Magnificent Obsession becomes exponentially more impossible as the film progresses. Playboy Rock Hudson, though undeserving, lives because Jane Wyman's noble husband dies. To make matters worse, he inadvertently causes Jane's blinding in a car accident. To make matters better, he journeys to Vienna, becomes an eminent surgeon, with one goal: to make her see. Out of this, Sirk created a magnificent, obsessive, consummately ironic essay on blindness and anxiety. Ever the anguished ironist, observer of the hollowness of middle-class ideals, Sirk's idyllic color vistas might seem to callously mock his heroine's blindness. But it is us he is mocking: playing on our pity, he creates a metaphor for our fear.