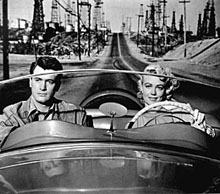 Written on the Wind, June 27

Sirk called this "my most gutsy picture"; the director's preoccupations with failure and the horrors of family were rarely writ so large. The myriad dysfunctions of the Hadley oil dynasty are blazoned on the screen in screaming colors and skewed angles, nonstop visual hyperbole declaring the epic scale of the family's decline. Although the melodrama's ostensible heroes are well-meaning outsiders Lauren Bacall and Rock Hudson, the real stars here are Robert Stack and Dorothy Malone as the doomed heirs to the Hadley legacy: a high-flying playboy falling rapidly into alcoholic regression, and a fervent nymphomaniac nostalgic for some imaginary childhood pastoral. Framed by the doors and windows of the plush, sterile family mansion, Stack and Malone convey the desperate intensity of trapped animals, showing too much of the whites of their eyes. In Sirk's universe, as Fassbinder pointed out, "the good, the 'normal,' the 'beautiful' are always revolting; the evil, the weak, the dissolute arouse one's compassion."