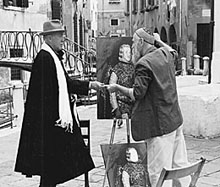 (Lundi matin). This acclaimed, Tati-esque comic odyssey from Otar Iosseliani follows the adventures of Vincent, a metalworker who walks out of his job in a French factory and hits the road, encountering an array of peculiar characters, and eventually discovering that it's easier to work than to be a traveler. Like its protagonist, the film is short on dialogue, and the cinematography's cool palette conveys the blue-gray quality of Vincent's life. The film gives a running commentary on the struggle between modernity and tradition—the final shot of spewing factory smokestacks indicates which is winning.