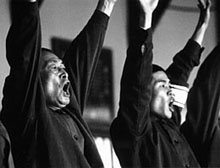 (Keimusho no naka). Here's a real anomaly: a charming men-in-prison movie. Based on an autobiographical manga by Kazuichi Hanawa and accompanied by a serenely hilarious voiceover by star Tsutomu Yamazaki (Tampopo), Yoichi Sai's delightful film depicts daily prison life as a near-Zen experience—endless cleaning, woodshop projects, and military regimentation—punctuated by meals real, imagined, and remembered. If God is in the details, then these mild prisoners are holy fools. Like most great prison films, Doing Time is about a lot more than life behind bars. It's more about the simple, deep satisfaction of a job well done.