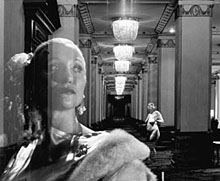 The Decay of Fiction, April 22

Avant-garde filmmaker Pat O'Neill is the recipient of this year's Persistence of Vision award. Known for his surrealist collages of the California landscape, in this new film he focuses on the Ambassador, a Los Angeles hotel that featured conspicuously in the city's political and showbiz lore until earthquake damage closed it down. Over a geometric ballet of time-lapse long takes through the gardens, corridors, and rooms of the decaying hotel, O'Neill adds a filigree of narrative vignettes, fragments from the lives of the hotel's guests. But if they once resided in the hotel, their real home was film noir. Shorts by Pat O'Neill: Coreopsis (1998, 6 mins, Silent) and Squirtgun Step Print (1998, 4 mins, Silent).