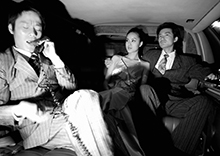 This first midcareer survey of the work of Yang Fudong (b. 1971) presents photographs, films, and multichannel videos by a leading figure in China’s contemporary art world and independent cinema movement.

Yang’s work reflects the ideals and anxieties of the generation born during and after the Cultural Revolution that is struggling to find its place in the rapidly changing society of the new China. Although he draws much of his subject matter from the consumerist contexts of contemporary urban China, many of his images recall the literati paintings of the seventeenth century (Yang first trained in painting before switching to photography and filmmaking). His films have an atemporal and dreamlike quality, marked by long and suspended sequences, divided narratives, and multiple relationships and storylines. In his recent installations, Yang reflects on the process of filmmaking itself, creating spatially open-ended multichannel films that he likens to traditional Chinese hand scrolls.

Our presentation of Yang’s work includes twenty years of photographs and video installations in the galleries; a film series at the PFA Theater co-curated by the artist that focuses on works that have influenced him; and a continuous loop of Yang’s single-channel films daily at midday in the Museum Theater. In addition, the companion exhibition Multiple Encounters considers the influence of classical Chinese painting on Yang’s work.