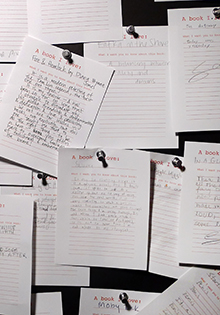 The Reading Room celebrates the written word and the central part it plays in our lives. Books from several noted East Bay small presses are shelved side by side with cherished books left by visitors. Drop by to browse and view related artworks. Bring a favorite book to leave in exchange for one from the ever-changing collection. Read visitors’ notes on why they love the book they have contributed. Leave a note for someone else. On selected Fridays, The Reading Room becomes the site of RE@DS, our literary series dedicated to poetry and experimental fiction.

David Brazil
David Brazil was born in New York and lives in Oakland, California. With Sara Larsen, he edits the monthly xerox periodical TRY! In 2010, his groundbreaking anthology (with Kevin Killian) The Kenning Anthology of Poets Theater:1945–1985 appeared to wide critical acclaim. He is active in the San Francisco Poets Theater and has co-curated a variety of local reading series, as well as the Poetic Labor Project's annual Labor Day event, which has invited writers to talk about how they make a living as well as their involvement in political work.  Forthcoming publications include Mina Loy Portal (Trafficker) and ECONOMY (Little Red Leaves).

Jaime Cortez
Jaime Cortez, our guest programmer for November and December 2012, is, a Bay Area writer and visual artist whose work has been exhibited throughout Northern California and whose short stories have been widely anthologized. He wrote and illustrated the graphic novel Sexile, and he is currently creating On The Job, a graphic novel about his immigrant father’s history as a laborer.

Jane Gregory
Spring 2014 programmer Jane Gregory holds an M.F.A. from the Iowa Writers’ Workshop and is currently working towards a Ph.D. at UC Berkeley. Her book My Enemies was published by the Song Cave in 2013. For RE@DS, Gregory has invited fellow UC Berkeley graduate students to present their creative work.

Sara Larsen
Sara Larsen, our guest RE@DS programmer for spring 2013, is a poet living in Oakland. Her most recent books are The Hallucinated; A,a,a,a,a; and Merry Hell. All Revolutions will be Fabulous is forthcoming in 2013.

Joshua Merchant
Spring 2014 programmer and East Oakland spoken word artist and poet Joshua Merchant, who has performed facilitated workshops at Ohio Wesleyan and Williams College, has selected young Bay Area poets who work in different mediums and relationships with “the word.” Merchant writes, “I believe that poetry is a cathartic process for both writer and audience. The space shared between poets and listeners is a sacred one. Think of it as being invited into someone’s favorite area in a park that most don’t know about. Share some kindling. Spark a bundle of wood. Have a bonfire.”

Serena Le
Fall 2013 guest RE@DS programmer Serena Le is a writer, musician, and Ph.D. candidate in English at UC Berkeley. She studies sound theory and modernist poetics, freelances as a violinist and instrumental band coach, and is working on a memoir project in fragmental prose.

Julien Poirier
Julien Poirier, one of two guest RE@DS programmers for fall 2013, is a poet and teacher who lives in Berkeley with his wife and two daughters. He has taught poetry in the New York City public schools and at San Quentin State Prison and was a founding member of the Ugly Duckling Presse Collective.

Suzanne Stein
Suzanne Stein is the author of Tout va bien (Displaced) and HOLE IN SPACE (OMG!). Poems, talk performances, and prose have appeared in War and Peace, On: Contemporary Practice, Counterpath Online; and at New Langton Arts, the San Francisco Exploratorium, The Poetry Project, and elsewhere. She is editor and publisher of the small, Oakland-based poetry press TAXT and was codirector and film curator at (f o u r w a l l s gallery in San Francisco. She works currently as community producer at the San Francisco Museum of Modern Art, organizing a variety of talk- and conversation-based programs, and is editor-in-chief of the museum's blog, Open Space.


The Reading Room is supported by a generous grant from the Kadist Art Foundation, San Francisco. Special thanks to Ramsay Bell Breslin for organizing the book installation, to Ross Craig for creating the sound installation, and to Meyer Sound for contributing the speakers. Thanks also to Kelsey Street Press, Atelos Books, Tuumba Press, and Small Press Distribution for their donations.
Sign Up | Program Guide | Podcasts