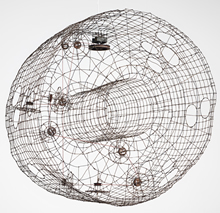 Measure of Time examines aspects of temporality and duration in American art and film of the last century. An exhibition in two, three, and four dimensions, analog and digital, it ventures from Joseph Stella’s Futurist-inspired Battle of Lights, Coney Island (1915–18) to Shirley Shor’s real-time digital projection Landslide (2004), from Jean Tinguely’s Black Knight (1964) to Ken Goldberg’s Ouija 2000, and from Frank Gillette’s video installation Aransas (1978) back to Charles Sheeler and Paul Strand’s film Manhatta (1920).

Since its inception in 1970, BAM/PFA has held a leading role in exhibiting and collecting time-based works—film, video, performance, Conceptual, and installation art. Measure of Time focuses largely on works from the BAM/PFA collections, with key loans of early-twentieth-century Modernist works from the Sheldon Memorial Art Gallery and the San Francisco Museum of Modern Art. Across the panorama of artists and approaches included in Measure of Time, we experience time and motion compressed, fragmented, mechanized, sped up, and slowed down to an almost imperceptible pace.

The early-twentieth-century artist Charles Sheeler claimed that his precisionist paintings actively combined memory and the present, reflecting the way in which we look at objects in nature through the memory of what we have previously observed. His early experiments in film and serial photography fueled this later, cumulative approach to painting. In Manhatta, considered one of the earliest independently produced avant-garde films in America, Sheeler and Paul Strand created a cinematic prose poem of the visual rhythms of New York City—automobiles, bridges, mechanical gadgets, and soaring buildings. Sheeler, Joseph Stella, Max Weber, and their peers shared the muse Modernity, an ideal that, according to Gertrude Stein, was imbued with a consciousness of time and speed.

Marcel Duchamp’s 1926 film Anemic Cinema, one of several works from this period exploring motion and optics and made in collaboration with Man Ray, flip-flopped concave and convex illusions, effectively disengaging traditional dimensional properties. Having unhinged the boundaries between stasis and flux, Duchamp made process and perception his artistic matter; these would become touchstones for generations of Conceptual practices from the 1960s on, from Frank Gillette to Jim Campbell. Motion and optics triggered another branch of artistic exploration, as delineated by Peter Selz’s groundbreaking 1966 exhibition at UC Berkeley, Directions in Kinetic Sculpture, which included sculptures driven by air, magnetic action, and electric motor by artists such as George Rickey, Pol Bury, Takis, Hans Haacke, and Jean Tinguely. The museum acquired several works from the exhibition.

Also in the mid-sixties, a novel tool—video—found its way into the artist’s studio with the commercial introduction of the Sony Portapak. Affordable and easy to use, video offered a particularly adaptable means for time-based experimentation and exploration, becoming, along with film and, eventually, digital media, a central rhetorical component. Working with duration is now a commonplace of contemporary artistic practice.

Measure of Time will remain on view for eighteen months, with works of art phasing in and out during the run of the exhibition. This extended timeframe and evolving installation allow us to recontextualize individual works while emphasizing and expanding on particular themes in the exhibition and its companion programs. This spring we will look closely at the nature of time in twentieth-century art; in the fall we will focus on early-twentieth-century Modernism in both art and film; and in spring 2007, process and performance-based Conceptual art come to the fore. Over the course of the exhibition, expansive works by Dennis Oppenheim, Sol LeWitt, and Terry Fox will be seen in succession, allowing us to look over time at a range of Conceptual practices. A changing program of film and video, featuring works by Oppenheim and Fox as well as Joseph Cornell, Tom Marioni, Theresa Hak Kyung Cha, Joan Jonas, and many others, will continue in the galleries throughout the exhibition. Measure of Time will also feature several recent acquisitions of works by Shirley Shor, Lewis deSoto, Sol LeWitt, Terry Fox, Mark Klett and Byron Wolfe, and Anne Walsh.

Measure of Time and its companion education programs will take place in Galleries 5 and 6 and online, culminating in June 2007.


Measure of Time is made possible by the Institute of Museum and Library Services and the Henry Luce Foundation.