In the Museum Store Eva Hesse: Studiowork, by Briony Fer. $50.00, hardcover only 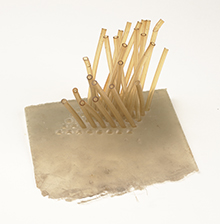 The German-born, American artist Eva Hesse (1936–1970) played a central role in the radical transformation of sculptural practice in the 1960s. Hesse belonged to a generation of artists, including Bruce Nauman and Andy Warhol, who expanded the conceptual and technical possibilities for art. BAM/PFA is extremely privileged to present a group of rarely seen sculptures that show the inner workings of Hesse’s studio practice. The objects, both small and large, range from raw material experiments to works in their own right, all of them revealing process and the moments between thinking and making. Organized by The Fruitmarket Gallery in Edinburgh, this unprecedented presentation of Hesse’s small-scale experimental works has traveled to London, Barcelona, and Toronto before its appearance in Berkeley. The exhibition contains many works from BAM/PFA’s own collection, part of a major gift made in 1979 by Hesse’s sister, Helen Charash; the Berkeley presentation includes a special selection of works from the collection that are too fragile to travel.

Over the course of her career, Hesse produced a range of experimental works that until now have not been recognized as an important subject of research. In the past they have been referred to as test pieces or prototypes, and valued as models or studies for large-scale works. In this exhibition, the art historian Briony Fer reevaluates these works, renaming them “studiowork.” She considers them as “thought-experiments,” works that capture moments of experimentation, where Hesse is trying out ideas and techniques and discovering new possibilities for her sculptural practice. Neither simply preparatory nor necessarily finished works, many of the studioworks exist slightly beneath the threshold of sculpture—but also question what we think sculpture is. They dramatize and draw attention to the open-ended nature of Hesse’s work as a whole.

Hesse lived and worked in her New York studio, a two-story loft apartment on the Bowery. A photograph taken by her friend Mel Bochner shows many items occupying a table made for her by her friend, the artist Sol LeWitt. She used the table in different ways: to arrange her own work and other objects that might be handled, and to display the ordinary, everyday ephemera of exhibition reviews and gallery announcements. In this exhibition, the work is displayed on table-like plinths that allude to how the works may have been encountered in Hesse’s own living space, temporarily arranged in groups on the worktable, always subject to change.

Eva Hesse: Studiowork features works made from a diverse range of materials, such as plaster and latex, painted wood, metal, sculp-metal (a vinyl and resin suspension of aluminum powder that could be applied over objects), fiberglass, rubber, plasterboard, cardboard, cotton, polyester resin, cheesecloth, wire, string, paper, and nets. This exhibition also includes a series of largely papier mâché works never before shown in public. Hesse’s interest in using unconventional materials and in pushing the materials to their limits—in an attempt to achieve thinness and translucency, or formlessness and density—meant that she produced works that are both fragile and subject to deterioration. These transient materials make clear the temporal dimension of art: they have time built into them. Hesse’s focused and intricate actions and hand gestures can be imagined from the evidence of their production: folding, pinning, piercing, cutting, stapling, layering, threading, wrapping, molding, and casting. Her arrangements and rearrangements of the works were also important to the making of the work.

Like any artist, Hesse made work in a particular context—in her case, New York in the 1960s. New materials were important to fellow artists such as Robert Morris, Bruce Nauman, Richard Serra, and Robert Smithson, who were also using materials that were originally soft and flexible, including aluminum, latex rubber, plastic, lead, polythene, copper, felt, chicken wire, dirt, and glue. Hesse was aware that she was producing works that were ephemeral, but this problem was of less concern to her than the fact that she simply wanted to work with materials that had a temporal dimension. As she stated in an interview with Cindy Nemser in 1970, “Life doesn’t last; art doesn’t last.” For Briony Fer, the value in these works is that “they are not universal and timeless, but leave us with a sense of a first encounter with things, the kind of encounter we had before we knew how to make sense of them.”


Eva Hesse: Studiowork was organized by The Fruitmarket Gallery, Edinburgh, in collaboration with Camden Arts Centre, London; Fundació Antoni Tàpies, Barcelona; Art Gallery of Ontario, Toronto; and the UC Berkeley Art Museum and Pacific Film Archive. The Berkeley presentation has been made possible in part by the Koret Foundation, the Elizabeth A. Sackler Museum Educational Trust, Dr. James B. Pick and Dr. Rosalyn M. Laudati, and the continued support of the BAM/PFA Trustees.