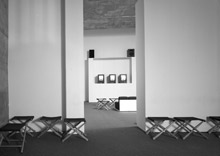 "As the variety of the environment magnifies in both time and space and as the structures that were thought to describe the operation of the world become progressively more unworkable, other concepts of organization must become current. These concepts will base themselves on the assumption of change rather than stasis, on the assumption of probability rather than certainty." (Brian Eno, "Generating and Organizing Variety in the Arts," Studio International, vol. 192, no. 984, Nov.-Dec. '76).

During the 1970s, Brian Eno emerged as a seminal force in the direction of avant-garde music. Though schooled in the fine arts in England, Eno achieved international acclaim as a musician when, with Bryan Ferry, he co-founded the British rock group Roxy Music. Roxy Music's complex studio production techniques were pioneered by Eno, who claims the recording studio itself as his primary instrument.

But it has been his own solo work that has established Eno's position in the tradition of electronic experimental music that runs from Var?se through Boulez, Stockhausen, and Cage and more recently manifested in the Minimal compositions of Steve Reich and Phillip Glass. As a result of his rock and roll preeminence, however, Eno has been able to inform his own non-rock work with an unparalleled understanding of the recording processes, while at the same time carrying the rigorous and intellectual elements of his solo work back to his popular production work. Eno's solo music shows a full grasp of the relatioship of behavior modification to the construction of aural environments. More recently (like the video pioneer Nam June Paik whose debt to Stockhausen et. al. is well acknowledged,) Eno has expanded the breadth of his recording work from purely sonic art to an audio-visual form by composing for recorded video imagery coupled with original music.

In a series of painterly video installations first shown in 1979 at the Kitchen Center for Video in New York, Eno explored the notion of environmental ambiance. Eno proposes a use for music and video that is antithetical to behavior control-oriented "Muzak" in that it induces and invites the viewer to enter a meditative, detached state, rather than serve as an operant conditioner for work-force efficiency. His underlying strategy is to create works which provide natural levels of variety and redundancy which bring attention to, rather than mimic, essential characteristics of the natural environment. Eno echoes Matisse' stated desire that his art serve as an armchair for the weary businessman.
Eno's earliest video works were synchronized, single-channel installations presented on three or four adjacent screens. In a move calculated to recontextualize the television set, and to subliminally shift the way the video image represents recognizable realities (like cityscapes), Eno has placed the screen (and camera) in a vertical orientation (as opposed to the television's standard horizontal positioning). Natural phenomena like rain look quite different in this orientation; less familiar but curiously more real. His music/video works are designed to "tint" the environment rather than dominate it-a direct relation to his musical strategies evident in purely audio works like Discreet Music (1975). Eno notes that "...(early) videos 2 Fifth Avenue and White Fences were designed for transit spaces (such as airports and train stations) and arose from the question, "What type of image would not presuppose the time and attention characteristically accorded a narrative structure?" This experimentation led him to the understanding that his preference for static images (changing color in relation to the natural changes in the environment such as the passing clouds) produced television that had the pictorial character of landscape painting, rather than a narrative thrust.

Eno's attitude toward video and observation seems related to that of Frank Gillette, a video artist well-known for his multiple-monitor landscape studies. Both their works are grounded in the basic world view and vocabulary of cybernetic theory (Eno, for example, refers to his music as a "self-regulating system",) and both work from a decidedly Minimalist perspective. Further, Eno's work is built on Morse Peckham's notion that art is a construction and not a direct reality allowing the artist to take liberties in the organization of the representation (such as pink clouds or a purple sky). This is where the two artists part company, as Gillette takes a more "objective" approach to video color and relies upon complex editing structures to convey and create sensibilities for the viewer. Eno's work is selected and altered but not edited internally, giving it a thoroughly different feeling.

In the new work, Mistaken Memories of Medieval Manhattan/White Fences/Motion Study, Eno combines 3-screen, synchronized imagery (Memories) with compositions that slowly evolve into three separate video tracks (White Fences and Motion Study). Though the artist doesn't expect the work to be viewed straight through and says he hopes people don't feel badly if they doze off during the piece, he does acknowledge that the museum site provides a different kind of ambiance-one more conducive to contemplation-than the previous installations at La Guardia Airport or Grand Central Station. The artist does not offer a Pop Art challenge to boredom; he just wants the viewer to relax.

Eno admits that the effect he is after is a meditative experience emerging from the combined music and image. He states that he has previously "...been interested in placing works in unorthodox locations on the assumption that a piece removed from the expectations aroused by conventional locations might evoke unexpected feelings in whoever discovered it." But the new work reflects the use of a conventional site for the contemplation of pictorial video imagery, and focuses our attention on Eno's remaining unresolved problem, "How can one deal with the limitation of the TV screen which focuses a point of view and a level of sensory attention in a way which music doesn't?"
Brian Peter George St. John le Baptiste de la Salle Eno was born in East Anglia, Great Britain in 1948 and studied Fine Arts at Ipswich and Winchester art schools between 1964 and 1969, receiving a degree from the latter. After leaving school he was a co-founder of the British rock group Roxy Music and has produced records for and with musicians including David Bowie, David Byrne (Talking Heads), Robert Fripp, and the Portsmouth Sinfonia. His own recordings include Discreet Music, Music for Films, and Music for Airports (Ambient Music I). His latest recording, a collaboration with David Byrne, is titled My Life in the Bush of Ghosts. An essay by Eno, "Self-Regulation and Autopoiesis in Contemporary Music" will soon be published in Challenge to Paradigm, an anthology of writings dealing with the applications of cybernetics. He is presently working on a videodisk production.

MATRIX is supported in part by a grant from the National Endowment for the Arts, a Federal Agency.