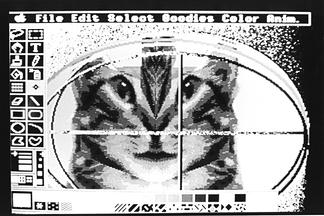 I claim, for the image, the humility and the powers of a madeleine.
-Chris Marker

In the seminal 1962 sci-film La Jetée, time travel may make it possible for humanity to survive a cataclysm. However for this escape through time to succeed, a person must be found who has a specific memory so fixed in his mind that it can serve as a compass pointing toward the past. This remarkable idea is the invention of Chris Marker, the inimitable French filmmaker whose lifelong investigations of culture andhistory have cut a singular path through cinema.

Marker's new video installation Silent Movie at first glance seems to be a reverie of a past aglitter with ineffable gestures, shadowy emotions, and a longing delicately attached to the silent screen. Commissioned by the Wexner Center for the Arts on the occasion of cinema's centenary, Silent Movie recalls the allure of early cinema through a pastiche of resonant moving images, many composed for the installation, others borrowed from pre-thirties American and French films. Enclosed in a steel tower reminiscent of Constructivist design, Marker's five-channel videowork evokes a past that is not a denial of the moment: memory and its compact with the present looms as a source of intrigue in Marker's filmic ruminations.

Having virtually reinvented the essay film, a playful form that relies on intertextual reference and exhilarating leaps of imagination, Marker's elegantly formal films and tapes are encyclopedic interrogations of time, death, and history and their meanings in the lives of individuals. The complexity of his philosophic reports, as in the incomparable Sans Soleil (1983), requires that he break with convention. Thriving on startling textures and serendipitous association, at their most inventive these works in form "resemble the logics and biases of memory itself," Wexner media curator Bill Horrigan observed.

Silent Movie, too, emulates memory, revealing charmed reconnoiterings of the past. Or as Marker suggested for a proposed CD-ROM, Immemory, "The idea would be to immerse myself in this maelstrom of images to establish its Geography." Marker employs five-channels of video, each a thematic exploration of early cinema. Film images disclosing "The Journey," "The Face," "The Gesture," and "The Waltz" occupy four of the monitors while on the fifth (and middle) monitor is a collection of ninety-four silent-era intertitles, "telling short, mysterious pieces of unknown stories." These moving images travel through a computer interface that assembles an ever-changing array of sequences. At any given moment, each passage is in unique juxtaposition with the other images passing across the surrounding monitors. Coloration, tone, and association are governed by chance contiguities; even the intertitles narrate across a field of fluid relationships.

What the viewer encounters is the complex act of remembering, allowing Silent Movie to confound its own narrative. No sequence of images, no set of associative references is repeatable and therefore emblematic of the whole. But all is not unbridled flux. Throughout the installation, Marker has included anchoring passages with Catherine Belkhodja, an actress who seems to capture the mute elegance of the silent era. Her continual reappearance in Silent Movie appoints her the de facto star of this monochromatic past, and by extension, Marker's alter-ego-the dreamer of his "Ur-Kino." Still other elements help anchor Silent Movie. A music track recalling the piano accompaniment once heard in silent film theaters draws on such diverse sources as Bill Evans, Alexander Scriabin, Billy Strayhorn, and Nino Rota. The "music doesn't create emotions, it fixes them, like you fix color," Marker remarked. Also part of the exhibition are ten computer-drafted posters advertising films that never existed, but should have. A silent version of Hiroshima, Mon Amor starring Greta Garbo and Sessue Hayakawa; Ernst Lubitsch's Remembrance of Things Past starring Gloria Swanson, John Barrymore and Ramon Novarro ("The first movie where the captions take more space than the image"); and Oliver Stone, Sr.'s It's A Mad Mad Mad Dog make up just part of Marker's alternative cinema history. These speculative posters are accompanied by eighteen photographic blow-ups of images drawn from the laserdiscs.

More than an engaging fantasy of the silver screen, Silent Movie evokes what Chris Marker has called a "pre-historic state of film memory"-his own vivid yet indecipherable recollections from silent cinema; and earlier still, a state pre-dating knowledge and reason: the "cinema of origins."

Chris Marker, born near Paris in 1921, began his filmmaking career in the early 1950s, working in close collaboration with the "Left Bank" filmmakers which included Alain Resnais, Agnès Varda and George Franju. In the late 60s and early 70s, he experimented with collective filmmaking as a member of SLON (Society for the Launching of New Works), completing, among others, Far From Vietnam (197) along with Jean-Luc Godard, Joris Ivens, William Klein, Claude Lelouch, Alain Resnais and Agn?s Varda. Several of his best known works are La Jet?e (1962), one of the great speculative fiction films, Sans Soleil (1982), a singular meditation on global culture, and The Last Bolshevik (1993), a portrait of Russian director Alexander Medvedkin. Many of Marker's films and tapes have been screened at the University Art Museum/Pacific Film Archive, including Letter from Siberia (1958), a travelogue that xamines its own structure, The Owl's Legacy (1989), a video symposium on the continuing resonance of classical Greek culture, and Primetime in the Camps (1993), an incisive look at media in a Bosnian refugee camp. Two current projects are a feature film, Level Five, and a CD-ROM, Immemory.

This MATRIX exhibition is supported in part by Mrs. Paul L. Wattis; the National Endowment for the Arts; Etant Donnés, the French-American Endowment for Contemporary Art; the California Arts Council; the UAM Council MATRIX Endowment Fund; the LEF Foundation; Stanley M. Smith, and an anonymous donor.

The presentation of Chris Marker: Silent Movie has been made possible by a generous grant from the Andy Warhol Foundation for Visual Arts. Major support for the development of Chris Marker: Silent Movie has come from a Wexner Center Residency Award, funded by the Wexner Center Foundation. Special thanks to William Horrigan and Sean Ulmer, Curatorial Assistant.