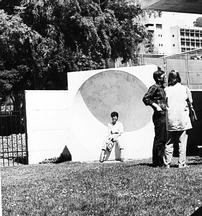 Douglas Hollis calls himself a public artist. All of Hollis's works, apart from preparatory drawings, are made for public sites rather than for gallery exhibition or private purchase. His primary objective is to make "places that have an oasis-like quality where people can catch their spiritual breaths..."

An interest in natural phenomena and its effect upon the landscape led Hollis to the development of acoustic structures that interact with the wind to create sound. Hollis became well-known for his wind harps and wind organs; one such work, The Wind Organ (1981), is permanently on view on a windy slope behind UC Berkeley's Lawrence Hall of Science. In this piece, Hollis slotted and tuned 36 organ pipes to produce harmonic sounds audible when the wind blows.

Throughout the late 70s and early 80s, Hollis continued to create sound structures sensitive both to the dynamics of the site and to people who might encounter them. A Venue (a temporary installation created for the Albright-Knox Art Gallery, Buffalo) is one in a series of walker-responsive, wind- and water-activated sound structures which, as Hollis describes, "integrate the participant into the dynamics of landscape, using the structures as sensory extensions of the body." As people walk out onto the floating walkway, constructed with string (harp) and pipe (organ), the undulation retunes the piece, thus altering the sound.

Hollis often collaborates with other artists in creating works. In Laser, Sound and Air (1969), a very early piece created for the Cranbrook Museum in Michigan and one of the first performance/installations to involve holography and laser projection, Hollis worked with musicians, dancers, filmmakers, engineers and physicists. A continuing interest in collaboration and a growing involvement with public art is evident in such recent works as A Sound Garden (1983), located on a gentle hill overlooking Lake Washington, and comprised of a grove of linear steel towers supporting wind-activated organ pipes. As people wander along the path of triangular brick pavers or sit on benches, they are made aware of the coastline, the changes in light as reflected on the towers and, of course, the wind. Hollis and the other artists who were invited to create works for the site-Siah Armajani, Scott Burton, Martin Puryear, and George Trakas-worked from the project's inception with the architects and landscape architects as well as community groups and government agencies, with the goal of designing an aesthetically pleasing and functional environment for the NOAA workers. A Garden of Voices, made in collaboration with Richard Turner, is an area where park visitors can rest and listen to the poetry of various neighborhood ethnic groups recorded in their native notices on audiotapes embedded in the seating structures.

Listening Vessels represents a further development of Hollis' s current interest in creating furniture for sound gardens. It is comprised of two parabolic chairs constructed of wood, plaster and metal, facing one another at a distance of approximately 50 feet. These "passive found structures," as Hollis calls them, are designed to collect and focus sound in space rather than, like the wind harps and organs, produce sound. As collectors of sound, the chairs deal directly with the space-shaping qualities of sound as wave phenomena, utilizing ambient sound in the environment as a source. The parabolic-curved chair backs reflect waves to the height of the sitter's head so that sounds made by the person sitting in the opposite chair are intensified in the ears of the listener. Following the same principle, ambient sounds are similarly focused by the curved dish. The use of two reflectors sharing a common focal point also creates unusual reverberations and echoes.

Hollis is one of a small group of sculptors (Bill Fontana in the Bay Area, Michael Brewster in Los Angeles and Max Neuhaus in New York are others) who deal with the way sound acts in spaces. In several current permanent installation projects, however, Hollis is designing works which interact with other natural phenomena, in addition to sound. Tidal Park (with Charles Fahlen) for Port Townsend, Washington, is a terraced wave garden on the site of an old ferry landing. It includes a spiral Tide Clock, which acts as a tide pool and measures the tidal ebb and flow, and a copper roofed gallery with sitting bays. Rain Column for Rincon Annex, San Francisco, is an interior 80-foot tall column of falling water drops which will interact with light as it comes through a skylight.
Hollis was born in Ann Arbor, Michigan, in 1948. He continued to live there through 1970, when he received his B.F.A. from the University of Michigan. He has lived in the Bay Area since 1973.

MATRIX is supported in part by grants from the National Endowment for the Arts, a Federal Agency, Mrs. Paul L. Wattis, and the Alameda County Art Commission's County Supervisors' Art Support Program.