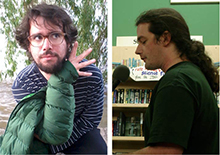 Garrett Caples is a poet living in Oakland. The author of The Garrett Caples Reader (1999), Complications (2007), and Quintessence of the Minor: Symbolist Poetry in English (2010), he is also the coeditor of The Collected Poems of Philip Lamantia (2013), a contributing writer to the San Francisco Bay Guardian, and an editor at City Lights Books. His book of essays, Retrievals, is forthcoming from Wave Books in 2014.

Filip Marinovich is the author of And If You Don’t Go Crazy I’ll Meet You Here Tomorrow and Zero Readership, both from Ugly Duckling Presse. His current incarnation is Wolfman Librarian, whose limbs are strewn throughout the World Wide Web, at such fabulous stations as Elective Affinities, EOAGH, and Overpass Books.