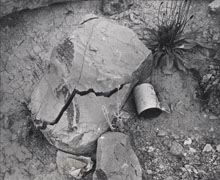 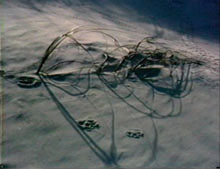 We have just installed the third and concluding stage of Measure of Time, an exhibition designed to evolve over the course of three academic seasons, revealing aspects of temporality and duration in American art from shifting angles. Lewis Baltz’s San Quentin Point (1983), an extraordinary portfolio of fifty-nine photographs, now extends across a wall in Gallery 5 adjacent to Frank Gillette’s mesmerizing video installation Aransas: Axis of Observation (1978). The Gillette installation has remained constant throughout this long exhibition, but its context changed as it acquired new neighbors. For those of us who have seen each iteration, traces of past iterations linger, almost like pentimenti. There is a new resonance between Gillette’s haunting mediation of nature and technology and Baltz’s systematic cataloging of landscape neglect and entropy—a resonance that is amplified by remembering the works that proceeded the Baltz portfolio on that same wall: a chain of Alfred Stieglitz Equivalents, and Mark Klett and Byron Wolfe’s 2001 restatement of Eadweard Muybridge’s 1872 photograph of the Merced River in Yosemite Valley. These adjacencies are now embedded in my thinking about Gillette.

The exhibition has resulted in an endless variety of new associations and discoveries, some of which revealed themselves quite by accident. One of the most delightful of these came at the very beginning of the exhibition. The Bay Area artist Lewis deSoto was in the galleries, putting the finishing touches on the sound of his video installation Observatory (1992). Seeing that Dennis Oppenheim’s series of photographs documenting the 1969 Annual Rings project was installed on the adjacent wall, deSoto told me that Annual Rings was one of the works that led him to the decision to become an artist.

As I write this, we are already talking about future exhibition ideas that have germinated from Measure of Time, the exhibition, the programs, and the writings for the book to be published later this spring. A number of major new acquisitions have been made during the course of this project, continuing the dialogue begun in the exhibition. Some have already been incorporated into the show: works by Sol LeWitt, Shirley Shor, Mark Klett and Byron Wolfe, and Anne Walsh. In the coming year we will install other multimedia works that relate to Measure of Time but have only just come into the collections, including Joan Jonas’s The Shape, the Scent, the Feel of Things (2004–05), a five-channel video and sculptural installation. In this way, Measure of Time has been a jumping-off point for ongoing research and collection development.

As in Jim Campbell’s multimedia installation Shadow (for Heisenberg) (1993), the Heisenberg principle applies: the act of observing alters what is observed. Collections are about changing and evolving relationships, not simply about objects, videotapes, and artists’ instructions carefully stored in quiet repose.