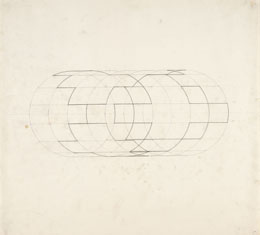 Terry Fox: Works from the Labyrinth, 1971–78; mixed media; 24 x 36 in.; purchased with the aid of funds provided by the National Endowment for the Arts and the University Art Museum Council.

The Bay Area in the late 1960s and seventies witnessed an important artistic shift away from the production of static objects and toward process and performance. Among the artists exploring these new possibilities was Terry Fox, whose Works from the Labyrinth series is on view in Measure of Time, an exhibition considering temporality and duration in American art of the past century.

Fox exhibited at BAM in its first year, 1970; though a very young artist, he had already been presenting artistic actions in the Bay Area for several years. The Labyrinth, a series he developed throughout the 1970s, incorporated a varied range of actions and objects in which he elaborated a symbolic and ritualistic vocabulary representing his life. As a teenager, Fox was diagnosed with Hodgkin’s disease, and he has faced significant health challenges for much of his life. During an extended stay in France in 1972, he walked the ancient labyrinth of Chartres Cathedral. One must make thirty-four turns through eleven concentric rings to reach the center of the labyrinth, a process that for Fox was less a physical act than a metaphor corresponding to his own cycles of health, sickness, and return to health. Through drawings, sculpture, video, and performance, Fox arduously explored the parameters of his own perseverance. Like a multidimensional collage, The Labyrinth extended over years as an ongoing work of art based on his lived experience.