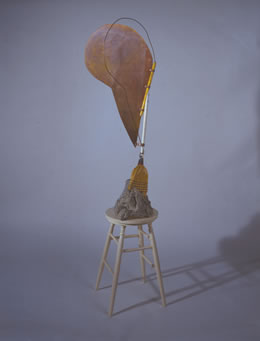 An evolving exhibition considering temporality and duration in American art of the past century, Measure of Time features many artists whose rejection of traditional materials and emphasis on process resonate with the work of Bruce Nauman. Among them is David Ireland, whose Good Hope (1991) is on view in Gallery 6. After studying at the San Francisco Art Institute in the early 1970s, Ireland began focusing less on the production of static objects than on the act of making, a process in which he considered the whole of his life as material for art. In 1975 he purchased 500 Capp Street, a building in San Francisco’s Mission District, to renovate as his home and studio. Cleaning the space, sorting through items left behind by the previous owner, and uncovering layers of the building’s history became in themselves a path of artistic exploration. Ireland realized that “the integrity I was looking for in my art was there on the walls and floors.”

Like many artworks that came into being at Capp Street, Good Hope (1991) consists of an altered, “aggravated” configuration of everyday objects and materials—an upright broom fixed in concrete atop an ordinary kitchen stool. The silhouette of a large ear extends like a sail from the broom handle. The stool is certainly a nod to Marcel Duchamp’s first readymade, Bicycle Wheel, and Ireland has made his home and daily life a laboratory for what Duchamp termed “playful physics.”