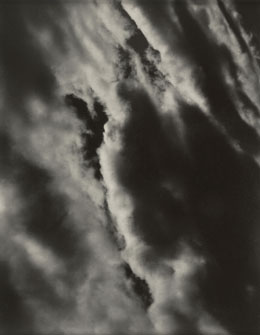 The evolving exhibition Measure of Time explores aspects of temporality and duration in American art across media and time. This fall, the exhibition and related programs focus on the Modernist period of the early twentieth century, especially in New York, with newly installed works by Alfred Stieglitz, Man Ray, Marcel Duchamp, and Joseph Cornell joining major paintings by Max Weber and Joseph Stella in Gallery 5. The Mechanical Age, a parallel film series at PFA, complements the Modernist artists' explorations of motion and speed by investigating filmmakers' ongoing fascination with the machine.

Newly arrived from France in 1915 and immersed in the avant-garde circles of New York, Marcel Duchamp (1887-1968) began to produce his first readymades—works of art made from manufactured, commonly available consumer products—revolutionizing the very definition of art. On view is Duchamp's Boîte en Valise (1966), which gathers miniature versions of his earlier projects into a witty time capsule extolling his own career. Joseph Cornell (1903-73), a contemporary and friend of Duchamp's, also worked with found materials, to radically different effect; his Sand Fountain (1950s) poetically evokes and stills the passage of time with its trickle of blue sand spilling over a broken glass.

Like Duchamp, Alfred Stieglitz (1864-1946) was in many ways at the center of the vibrant American art scene in the first half of the twentieth century, bringing together and influencing artists, poets, musicians, and writers through his famous magazine Camera Work and his gallery, Little Galleries of the Photo-Secession, later called 291. Through his own mature photographic style, he encouraged artists to look to their immediate surroundings for inspiration, photographing their subjects in an expressive, even spiritual way. On loan this season from the San Francisco Museum of Modern Art are eight photographs (1923-29) from Stieglitz's Equivalents, a decade-long project of hundreds of cloud studies made during summers spent at Lake George in upstate New York. In the absence of earth and sky, the clouds become abstracted forms, representing for Stieglitz inner emotions and spirit. Arranged out of chronological order and unbound by narrative, the photographs convey a fluidity of time and space, evoking the Modernist notion that the past, present, and future are also fluid and in constant motion.

Also newly on view this fall, in Gallery 6, are films and videos by Tom Marioni, Joan Jonas, and Dennis Oppenheim, along with Sol LeWitt's photographic installation A Sphere lit from the top, four sides, and all their combinations (2004), a series created eighty years after Stieglitz's sequencing of the summer sky.