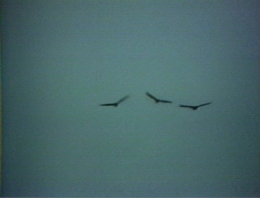 Measure of Time was conceived almost four years ago as an investigation of time-based media works in Berkeley Art Museum collections. From the beginning, Frank Gillette's Aransas: Axis of Observation (1978) was central to the show; radiating from this axis, the exhibition developed not along a linear timeline but in relational directions. The exhibition now on view in Galleries 5 and 6 examines aspects of duration and temporality in American art of the last century.

Gillette was among the first generation of artists to use video in the late 1960s. A novel tool, video found its way into the artist's studio with the commercial introduction of the Sony Portapak in 1965. Affordable and easy to use, video offered a particularly adaptable means for time-based experimentation and exploration, becoming, along with film and, later, digital media, a central rhetorical component of avant-garde work. Gillette approached videotape as (in his words) “a navigational tool . . . a way of navigating through a high flux of ideas, stimulus, suggestions and imports of all kinds.”

Like the Portapak in the sixties, the movie camera was still a novelty in 1920 when Charles Sheeler and photographer Paul Strand teamed up to film Manhatta. Sheeler bought a French-made Debrie, a combination 35mm still and movie camera, just after its release in 1918. It was lightweight and easy to use, primarily for shooting newsreels on location. Manhatta, one of the first avant-garde films made in the United States, was a portrait in time of what Walt Whitman called “the city of the world,” a cinematic prose poem exalting the energetic and modern pulse of New York City. Sheeler and Strand constructed a rhythmic series of images, interspersed with verse excerpted from Whitman, fashioning an expression of the city over the course of a day. Their urban portrait begins at dawn as scores of people arrive to a day of work. “City of tall facades of marble and iron . . . When million-footed Manhattan unpent descends to its pavements.” In shots from high perches around lower Manhattan, we see people hustle about, smokestacks billow, machines giving rise to new construction. And at the end of the day, man and machine slow to rest as dusk descends upon the city.

At the opposite end of the exhibition's timeframe is Shirley Shor's Landslide (2004), a real-time, non-repeating map animation projected on a sculptural bed of sand. Landslide maps a landscape of grids, borders, and territories in continuous flux. Shor's map constantly shifts and slides into another iteration of itself. In one moment Landslide might suggest a modern urban plan growing in spatial density and complexity by the instant; as the visual pattern modifies, urban plan morphs into camouflage-tinted desertscape, like a history that writes, erases, and rewrites itself in a persistent present.