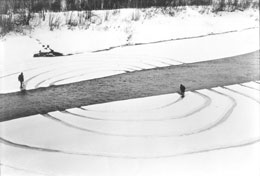 In the late 1960s Dennis Oppenheim began making earthworks involving sites in the environment, man-made or natural. Annual Rings was an action that he carried out in Maine on the U.S.–Canadian border. On the snow-covered ice of the boundary waterway, Oppenheim used a snow shovel to etch huge concentric rings suggesting the pattern of growth rings in a tree. Cutting back and forth across the boundary line, his massive artistic marks on the land (certainly mocking the Abstract Expressionist–era dominance of the artist’s gesture) not only breached political borders, but also traversed time zones. Oppenheim’s punning action, shortly to dematerialize into the nature systems of weather and change, is preserved in time through documentary photographs. Several are now on view in Measure of Time, an exhibition in Galleries 5 and 6 examining aspects of temporality and duration in American art and film of the last century.